ONCE dedicates 5.5 million lottery tickets to the Accessible Wine Route of Rías Baixas 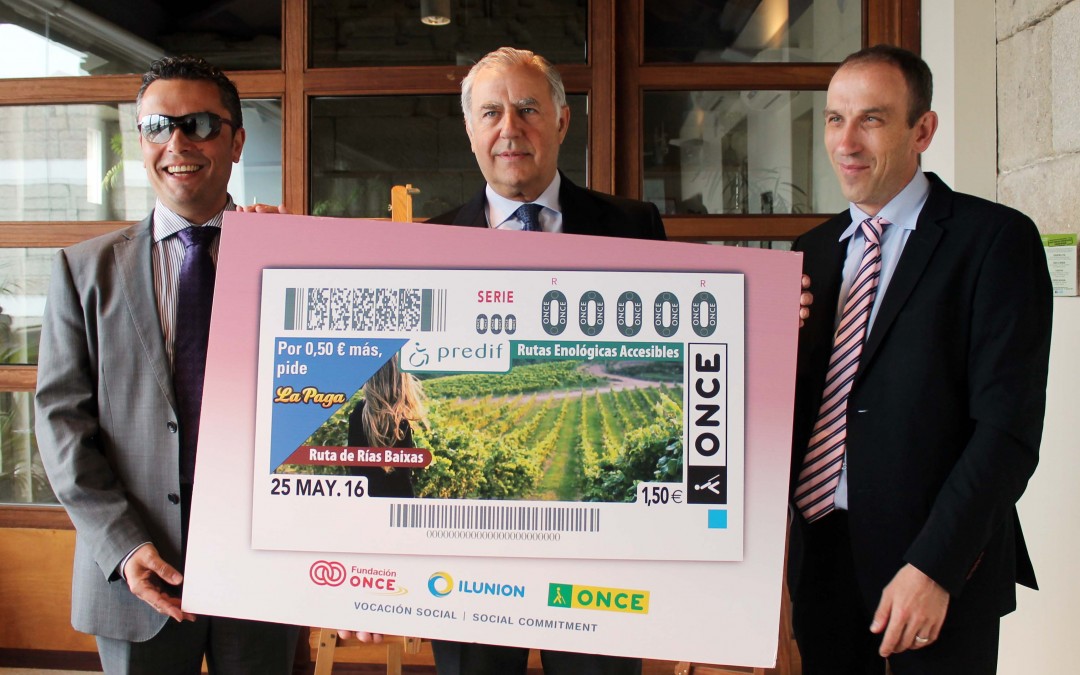 The Accessible Wine Route of Rías Baixas is the cause for the ONCE lottery ticket of next Wednesday 25th of May, which includes a series of eleven tickets for the Guía de Rutas Enológicas Accesibles para Todas las Personas (Guide of Wine Routes Accessible for all People), published by the Plataforma Representativa Estatal de Personas con Discapacidad Física – PREDIF (State Platform Representing People with Physical Disability). Five and a half million ONCE lottery tickets will be sold throughout Spain and spread the word about the sole and exceptional accessible wine route of Galicia, in precisely the same year that Ruta do Viño Rías Baixas celebrates its 20th anniversary.

The ticket was presented this morning at Pazo Mugartegui in Pontevedra, headquarters of the Regulatory Council of the Rías Baixas Denomination of Origin, at an event led by territorial delegate to ONCE in Galicia, Manuel Martínez Pan, and the president of Ruta do Viño Rías Baixas, Juan Gil de Araujo, who were accompanied by the general manager of the Accessible Route, Lorena Varela, and the head of ONCE in Pontevedra, Roberto Carlos Gaspar.

Gil de Araujo confirmed Ruta do Viño Rías Baixas’ commitment to accessibility and reminded everyone that 15 of its partner establishments are accredited for being accessible to people with physical disabilities; a list that will only grow. “Our goal is that no person should feel discriminated for his/her physical condition when accessing our services and establishments,” he concluded.

Manuel Martínez Pan also highlighted that “with this symbolic gesture” of creating a lottery ticket for the cause, “ONCE wants to join in promoting cultural values and in a thriving sector such as wine tourism”.

The series for Wine Tourism Routes of Spain began on the 6th of April. Within this series are eleven daily tickets, which are raffled from Monday to Thursday, and which have featured, to date, the routes of Rueda, Jumilla, La Garnacha-Campo de Borja, La Rioja and Montilla-Moriles. Next Wednesday 25th of May, Ruta de Rías Baixas will be featured and, subsequently, in June and July, the routes of Ribera del Guadiana, Utiel Requena, Penedés and Ribera del Duero will appear.

The Guía de Rutas Enológicas Accesibles para Todas las Personas (Guide of Wine Routes Accessible for all People) is a project developed by the organisation PREDIF, with support from the ONCE Foundation and the Vodafone Spain Foundation. It became recognised at state level in June of 2015 in an event celebrated at the Palacio de Fefiñanes winery, in Cambados.

Ruta del Vino Rías Baixas can be found on the North-eastern Atlantic coast of Spain, in the region of Galicia, and extends across most of the province of Pontevedra and South of A Coruña. In these lands, winegrowing is deeply lined to the landscape, heritage, local festivities, the cuisine and, ultimately, Galician popular culture. The vines grow in a rich area, close to the sea and surrounded by immense cultural heritage. Surrounding the vineyards are marvellous towns, beaches, manors, cruise ships, churches, museums, hiking trails, etc.

For more information about the guide in general, specific routes, or to download the guide, go to: www.rutasdelvinoaccesibles.predif.org.

The daily lottery ticket sold by ONCE offers, for 1.5 euros, 55 prizes of 35,000 euros for the five numbers. Plus, purchasers can, for 0.50 euros more, also play the series and win “La Paga” of 3,000 euros a month for 25 years, which will be added to the grand prize of 35,000. The numbers before and after the winning number will win prizes of 500 euros; and there will be prizes of 200, 20 and 6 euros for the fourth, third and last two digits, respectively, of the winning ticket. In addition, there will be a refund of 1.5 euros for those with the first and last digits.

The ONCE lottery tickets are sold by 20,000 ONCE sales agents. As always, thanks to the point-of-sale terminal, purchasers can choose the number they like the most. Plus, tickets can also be bought online from the official ONCE website www.juegosonce.es.