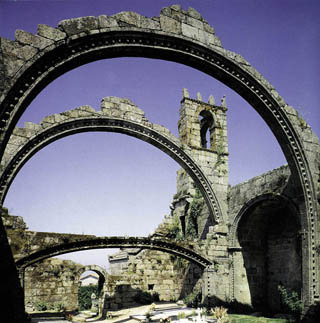 Its construction began on the impulse of Doña María de Ulloa, on a first construction of his father, in which it was the site of an old Romanesque chapel.
The ruins belong to an old parish church (Santa Mariña, patron saint of Cambados) abandoned in the mid-nineteenth century and its remains (no roof and facade) were declared a Monument of National Tourist Interest in 1943. The church was formed by a single nave, divided into five sections by semicircular arches , decorated with balls, that supported a wooden roof and in which they appear different representations like: Laziness, in the third arc, represented by a figure of a man with head between the legs or the representation of San Miguel with the devil to the feet on the side of the epistle. The apse is covered with a ribbed vault.
The lateral chapels are interesting, highlighting the third one on the side of the Gospel, with reliefs referring to the Annunciation of the Virgin.

DO NOT HESITATE TO CONTACT US TO KNOW THE VISITING SCHEDULE