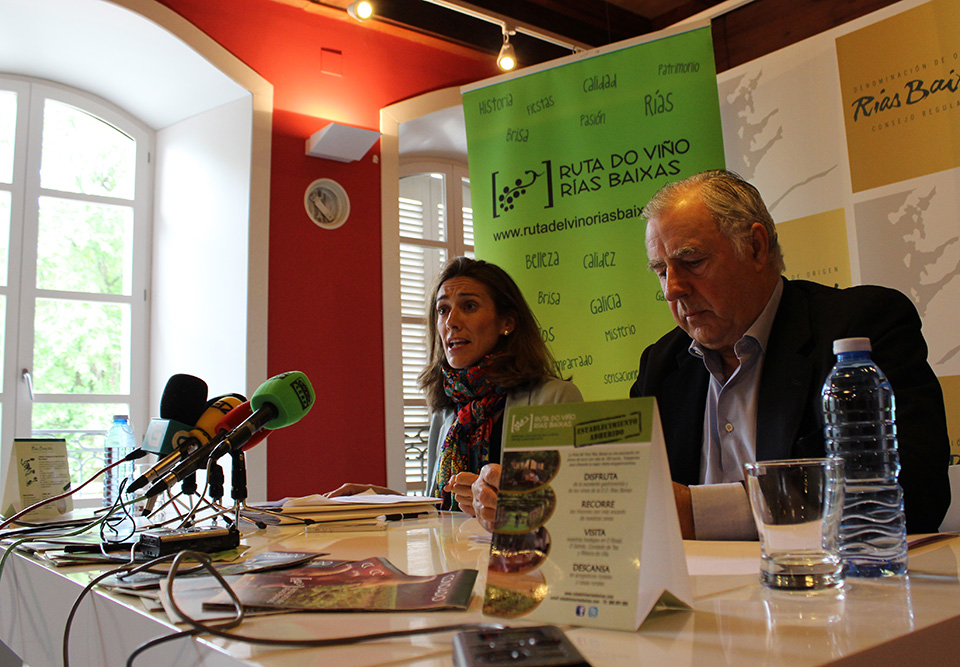 Ruta do Viño Rías Baixas, member of the Club de Producto (Product Club) of the Wine Routes of Spain, received over 100,000 visitors in 2016. This first account, based on data from the ACEVIN – Asociación de Ciudades Españolas del Vino (Spanish Association of Wine Cities) was presented today by the president of Ruta do Viño Rías Baixas, Juan Gil de Araujo, and by the general manager, Lorena Varela.

In his statement, Gil de Araujo highlighted that “following a trend of recent years, we have reached an all new record, exceeding, for the first time, the number of 100,000 visitors to Ruta do Viño Rías Baixas. This means a registered increase of 15% (14.91%, to be exact) with regards to the previous year, in the number of people who toured one of our partner wineries or wine museums,” he added. The over 100,000 visits registered during 2016 mean an increase of more than 70% in the last five years, and over 31% compared to 2014.

Gil de Araujo also indicated that “the results are fruit of not only the efforts of the management body of Ruta do Viño Rías Baixas, but also of its partners, who I think are more than deserving of public appreciation for their work and faith in this project. Because this wine route, pioneer in Galicia, was born, now 21 years ago, with the desire to serve as a motor for the economy of the region where it is based. Today our work is endorsed by Club de Producto (Product Club) of Wine Routes of Spain, who audits us every two years, and by the ACEVIN reports, that corroborates the good work of our non-profit association with results that place us among the top wine routes in Spain”.

Lorena Varela reminded everyone that Rías Baixas is the only Galician wine route that is a part of the Wine Routes of Spain and Guía de Rutas Enológicas Accesibles para Todas las Personas (Guide of Wine Routes Accessible for all People) edited by Plataforma Representativa Estatal de Personas con Discapacidad Física – PREDIF (State Platform Representing People with Physical Disability). Accomplishments that are accompanied by various acknowledgments and prizes, such as the one recently received for the association’s pro-accessibility work, only reaffirming the good work of Ruta do Viño Rías Baixas.

In this regard, Lorena Varela was in charge of updating the activities of Ruta do Viño Rías Baixas over the past few years. The general manager also read a report issued by ACEVIN that corroborates that the budget of 2015 of this non-profit association showed no signs of “errors or irregularities that could affect the equity or liquidity of the budget for the fiscal year analysed,” states the document.

Lorena Varela also briefly explained the evolution of the accounts of Ruta do Viño Rías Baixas over the past three years (from 2014 to 2016), with the budget approximating 100,000 euros. She indicated that about half of the income of the non-profit association comes from subsidies granted by public administrations. While in 2016 some of the grants were recovered, in 2015 they were reduced considerably, forcing the organisation to cut costs for this year. In terms of costs, half were allocated to personnel and operations, while more than 40% were concentrated on promoting the wine tourism destination.

“As you can see, we depend on subsidies to be able to carry out the wide variety of leisure activities offered over the past years,” she indicated. In fact, in 2016 over one thousand people took part in the score of initiatives carried out as part of Ruta do Viño Rías Baixas’ annual promotional programme.