Magic, cycling with the family and accessible activities; the main novelties in Ruta do Viño Rías Baixas’ extensive annual programme 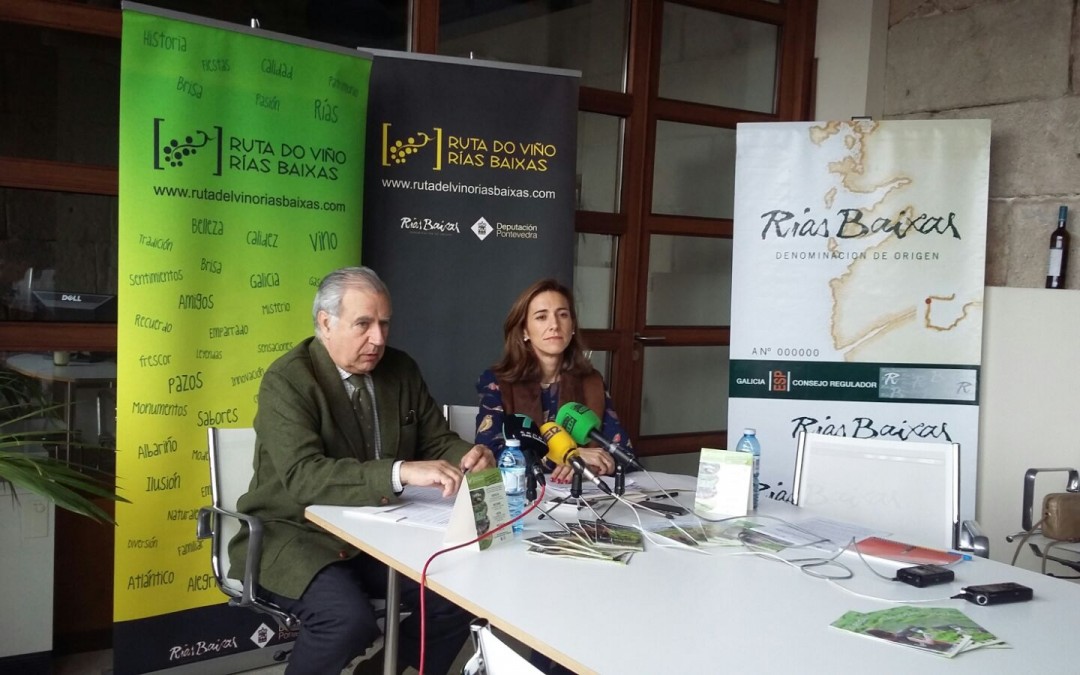 Magic shows, cycling for families and accessible activities are the main novelties in the annual programme of Ruta do Viño Rías Baixas, a wine route included in the Club de Producto (Product Club) of Wine Routes of Spain. This morning, the president of the non-profit association, Juan Gil de Araujo, and the general manager, Lorena Varela, presented the different initiatives to be carried out in 2017 at a press conference.

In his statement, Gil de Araujo highlighted that “over 1,500 people participated in the activities organised by Ruta do Viño Rías Baixas during 2016. These good results motivate us to continue innovating with different ideas that promote the value of wine and food tourism in our region,” he concluded. The president also advanced a first account of the number of visitors last year to the partner wineries and establishments which, he affirmed “is going to be very positive,” ratifying “the progressive interest in Ruta do Viño Rías Baixas among foreigners and visitors”.

Lorena Varela, on the other hand, broke down the programme of activities for 2017. “One of the main novelties this year is Ruta de Ilusión (Route of Illusion). It is a programme included as part of the Open Day of Rutas del Vino de Galicia (Wine Routes of Galicia), with two performances by Pedro Volta in partner wineries,” said the general manager. This special programme will also include a new session of Ruta con Humor (Route with Humour), led by Quico Cadaval.

Other novelties this year include the Ruta de Estrellas (Route of Stars), which will take place in the summer. This initiative will include “a night visit to a partner winery with star gazing afterwards,” said Lorena Varela. In-line with a commitment to linking wine tourism and sports, Bici en familia (Cycling with the family) will also be offered and will take place in the area of As Neves. Linked to this event is a new edition of BTT Ruta do Viño Rías Baixas, which, this year, will take place in the sub-region of Condado do Tea. Plus, two new routes will be offered for hiking fans.

For activities geared towards accessibility, the non-profit has organised, together with Asociación de Personas Sordos (Association for Deaf People) of Santiago de Compostela, a visit and wine tasting in sign language, with the goal of making wine tourism available to deaf people. “We are also planning another initiative for people with cerebral paralysis,” noted Lorena Varela.

Among the novelties this 2017, there are various visits to Ruta do Viño Rías Baixas. Among them is the Fam Tryp of Ruta del Vino de Monitlla-Moriles, as well as the route for students of the Master in Tourism that will take place on the 9th of March. Ruta do Viño Rías Baixas will also carry out a journey of familiarisation to one of the Wine Routes of Spain, with the goal of interchanging experiences and broadening knowledge.

Additionally, certain consolidated activities will be maintained in this year’s programme, such as Catas entre Amigos (Wine Tastings Among Friends), which began last Friday with a wine tasting of Rías Baixas reds in Santiago de Compostela. The sessions will take place in the cities of Vigo, Pontevedra and O Grove.

Ruta do Viño Rías Baixas is also collaborating with the Regulatory Council of the Rías Baixas Denomination of Origin for the Cata por el Día Internacional de la Mujer (Wine Tasting for International Women’s Day). This will take place on the 10th of March at 20:00 at Pazo de Mugartegui. “This activity, aimed exclusively at women, is already fully booked,” specified the general manager.

The annual programme will not go without the VI Cata Amateur (6th Amateur Wine Tasting) of Ruta do Viño Rías Baixas, the main act among the activities planned for the European Day of Wine Tourism. In addition to this initiative there will also be a new wine tasting of the wines from the region of Ría de Arousa, aboard a catamaran.