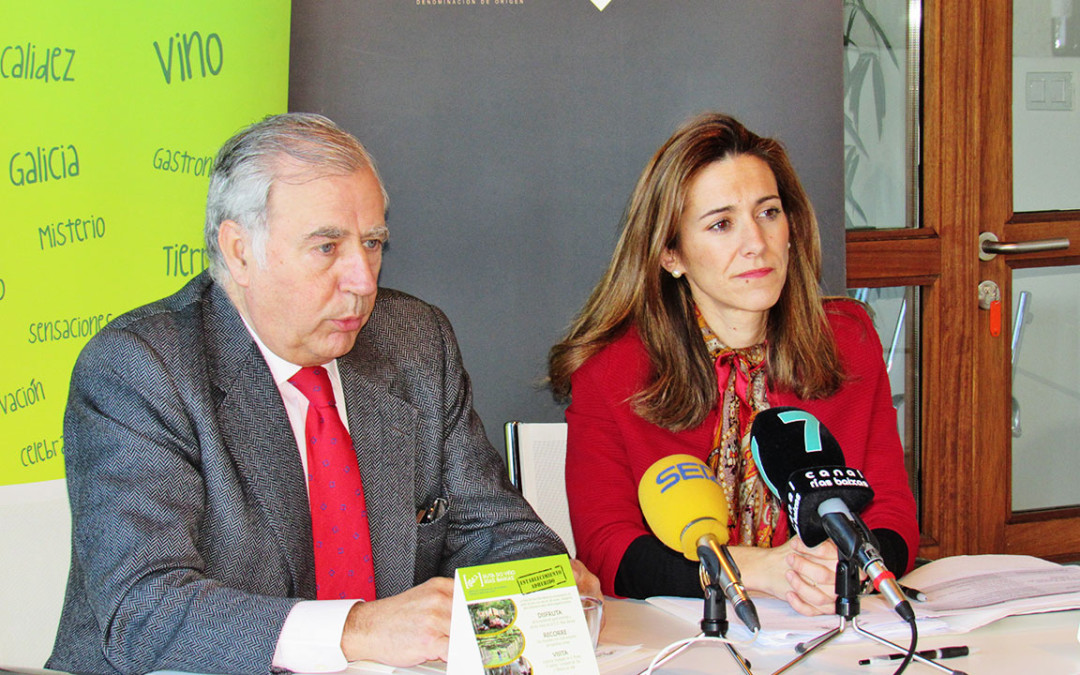 This morning, the president of la Ruta do Viño Rías Baixas, Juan Gil de Araujo, and the general manager, Lorena Varela, presented a special programme to the Regulatory Council of the Rías Baixas Denomination of Origin, to celebrate the 20th anniversary of the founding of this non-profit association. To celebrate this important date, “we have opted for a variety of activities for all audiences. This programme, which we have put a lot of effort into, we hope will bring more visibility to the Ruta do Viño Rías Baixas as a wine and food tourism destination of greater quality,” said Juan Gil.

Hiking routes and BTT races, wine tastings, talks and even a fun run will become a part of the special programme for the Open Day and European Day of Wine Tourism. “From here until the end of the year, we’ll have options of different nature each month, making Ruta do Viño Rías Baixas very present during the year 2016,” claimed the president.

The special programme for the 20th anniversary of the Ruta do Viño Rías Baixas will start this month with online events, as detailed by Lorena Varela. These will include “contests and raffles on our Facebook page on every 20th of the month. Each month participants will have the opportunity to win sets of bottles of wine from our partner wineries,” explained the general manager of this non-profit association.

The other activities will start on the 4th of March with the first of four proposals of Catas entre amigos (Tastings among friends). “This initiative will take place in four of Galicia’s main cities – Santiago, Pontevedra, A Coruña and Vigo – during the next three months. The main novelty is that, this time, we will also incorporate two red wine tastings, giving participants the opportunity to also taste this variety from the Rías Baixas Denomination of Origin,” explained Varela. The sommelier Nacho Costoya will be in charge of conducting the planned wine tastings in Santiago (4th of March), Pontevedra (1st of April), A Coruña (22nd of April) and Vigo (6th of May).

During the summer months there will be a wine tasting on a catamaran, which was a great hit last year, as well as a fun run and BTT race and hiking. When speaking about these initiatives, Varela assured that “our intention is to associate wine to a healthy lifestyle, as both are in no way incompatible”.

Ruta do Viño Rías Baixas will also have specific activities for its partners. These include two talks about sales techniques and digital marketing, which will take place in the months of March and June, respectively.

This year, the non-profit organisation will also promote activities for the disabled. “We’re in talks with different entities, such as ‘Fundación Down Compostela’, to offer initiatives that adapt to the groups they represent. We want to foster these kinds of proposals, as we are a part of the ‘Guía de Rutas Enológicas Accesibles para Todas las Personas de Predif’ (Guide of Wine Routes Accessible for all People of Predif) and we believe that it is our duty to fulfil the demands of different sectors of the population,” stated Lorena Varela.

To add to this programme, there are also specific activities for the Open Day, set for the end of May, and the European Day of Wine Tourism, which will be celebrated on the 13th of November. “We will try to include initiatives that are suitable for all sectors of society, taking advantage of the infrastructure of our partners to appeal to all different groups”, concluded Lorena Varela, who announced that this is “a teaser of the special programme planned for this year, as we are still finalising other activities that we hope to surprise everyone with”.

In addition, the president of the non-profit organisation also reflected on the achievements of the last two decades. In his own words: “the Ruta do Viño Rías Baixas was founded by a group of wineries and the Regulatory Council of the Rías Baixas Denomination of Origin who wanted to open their doors to visitors so that they could discover first hand our rich winegrowing heritage. This was the first project of its kind developed in the Galician community and one of the pioneers in Spain”, he affirmed.

From its beginnings, Ruta do Viño Rías Baixas has bet on quality wine tourism and offering the best and most varied leisure offering to its visitors. This has led to various achievements over the years. Among them is the fact that this is the only Galician wine tourism itinerary certified as a Wine Route of Spain, since 2005, and included in the Guía de Rutas Enológicas Accesibles para Todas las Personas de la Plataforma Representativa Estatal de Personas con Discapacidad Física (Guide of Wine Routes Accessible for all People of PREDIF). In addition to this recognition is the ‘Q’ certification from Calidad Turística (Quality Tourism), as well as a notable mention from the Sistema Integral de Calidad Turística En Destinos, SICTED (Integral System of Tourism Quality at Destination).