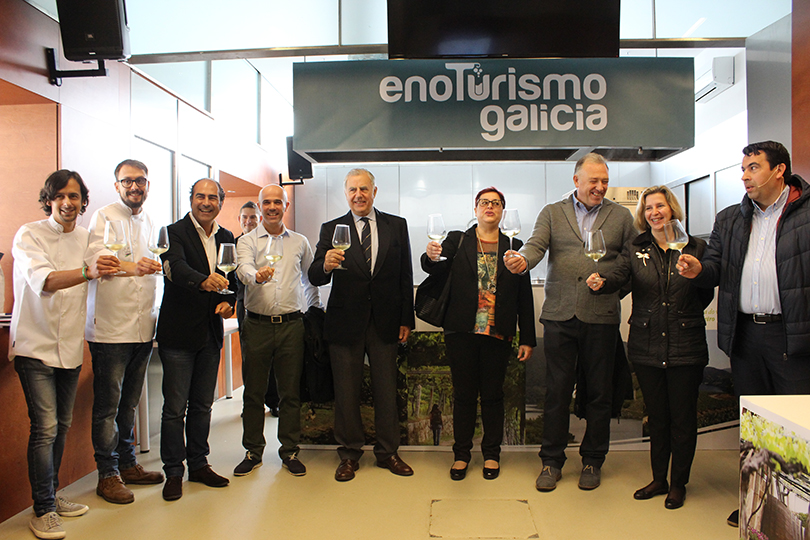 Yesterday, Aula Gastronómica of the old market of Santiago hosted the presentation of the project ‘Enoturismo Galicia’, created by Clúster de Turismo de Galicia (Tourism Cluster of Galicia) and that includes Ruta do Viño Rías Baixas, O Ribeiro, Ribeira Sacra and Monterrei. The main goal of this initiative is to serve as an umbrella brand for promoting the extensive winegrowing heritage of the Galician community. The event was led by the secretary of Clúster de Turismo (Tourism Cluster), Cesáreo Pardal, and presided by the head of Axencia de Turismo de Galicia (Tourism Agency of Galicia), Carmen Pita. Both were accompanied by the president of Ruta do Viño Rías Baixas and the Regulatory Council of Rías Baixas Denomination of Origin (CRDO), Juan Gil de Araujo; the vice-president of CRDO, Concepción Iglesias Pusa; the president of Ruta del Vino de Ribeira Sacra, José Manuel Rodríguez González, and the technical director of CRDO Monterrei, Luis Miguel López Núñez. 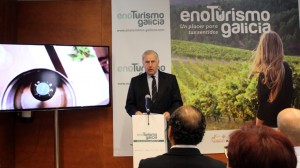 The representatives of the different wine routes, joined under the brand Enoturismo Galicia, coincided in highlighting the launch of the said initiative. Juan Gil de Araujo indicated that “through the different activities that are being developed for this joint project, we want to try to de-seasonalise wine tourism, so that visitors can enjoy our ample offering at any time of the year. A goal that, from today, we’re a little bit closer to reaching, and that with hard work from all can be achieved,” he concluded.

After the presentation of the brand, the event attendees enjoyed a wine tasting with pairings, featuring wines from the four wine routes present. Dishes were presented, following the instructions of the prized sommelier Nacho Costoya, with the different wines and were prepared by well-known chefs Kike Piñeiro and Eloy Cancela, from the restaurant A Horta do Obradoiro.

Plus, the press and wine and food bloggers present participated in a raffle, where the winner received a Gastronomical Fall pack consisting of dinner, lodging and breakfast for two, as well as several other gifts. Prizes that can also be won from today, until the 30th of October, to all those who upload a photo of experiences enjoying any of the wines from these routes to the social media accounts of Enoturismo Galicia (Twitter, Facebook and Instagram), with the hashtag #sorprendeatussentidos #enoturismogalicia.